Olivier Freeling-Wilkinson, Co-Founder and CEO
It was just another chilly night in London, and Sean representing one of many Londoners who park their electric vehicles (EVs) on the street needed to recharge. Every few days, he would drive two miles to the nearest ‘rapid’ charging point, hoping it would still be working and available when he arrived, and then wait 30 to 60 minutes in the car while it charged.

Interestingly, the challenge is not just for Sean alone; over 30 percent of people in the UK, who don’t have a driveway to install an EV charger, face a similar challenge. For them, charging an EV is inconvenient and anything but ‘rapid.’ For the 10 million non-EV drivers without a garage or drive, this lack of convenient near home charging in the street where they live is a major disincentive to EV adoption. But what if EV users like Sean had a simpler EV charging option? “Imagine this.

An EV driver parks their car in the street where they live on return from work and clicks on an app on their smartphone. A retractable, barlike charging point complete with blue lights and resembling something from a Star Trek episode rises quietly from the ground to hip height. The EV driver plugs in and walks away, safe in the knowledge that the car will be charged by morning. “On return to the car, the driver simply unplugs and the charger retracts back underground and the driver’s chosen payment card is automatically debited,” states Olivier Freeling-Wilkinson, Co- Founder and CEO of Urban Electric, painting a futuristic picture of EV charging points. Even though this idea might sound like one out of the science fiction stories, Freeling Wilkinson’s company, Urban Electric a British startup is making this possible today. The company, led by one of the most experienced teams in the industry (including people who launched the UK’s first electric car, first public charge point, and first public charging network), has spent the last two years field testing their EV charging points across different parts of the UK and have already signed up their first local authorities, whose permission is required to install the charging infrastructure.

Catalysing the EV Revolution Freeling Wilkinson explains that more than 100 million drivers park on the street at night across Europe. Until now, the only two options for EV charging were either clunky bollards that caused street clutter and pavement obstruction, or lamp post charging spots that are not a scalable solution as typically only about one third are usable for charging.

The Urban Electric team spent four years and £5 million in research and development, to develop its unique solution the UEone retractable charger,which is going into commercial production for European markets in 2022

To solve this issue, the Urban Electric team spent four years and £5 million in research and development to develop its unique solution,the UEone retractable charge point, which is going into commercial production for European markets in 2022.

The UEone ‘pop-up’ charging system is a fully retractable hub-style charging solution. Designed primarily for residential streets and visitor parking bays, the UEone hub typically comprises three dual-socket 7 kW fast charge points, deployed as six “EV Only” charging bays. At 40 percent utilisation (in use overnight and just 1-2 hours per day), each bay will serve the annual charging needs of approximately 60 EVs, enough for a whole street. “So just three charge points which stay retracted underground most of the day solve the problem of charging EVs for a whole street. At the same time, the concealed nature of these charging units minimise street clutter and pavement obstruction,” notes Keith Johnston, co-founder and chief business development officer at Urban Electric.

In addition to being the only retractable charging system in the market right now, the UEone features a second unique characteristic: instead of being cemented permanently into the ground, the UEone is a plug and play system. This means, any given time, if a charger fails to operate, it can be entirely replaced in under 30 minutes. And due to this feature, UEone hubs provide almost 100 percent uptime.

Urban Electric has so far run pilots with Oxford, Dundee, Plymouth, and Staffordshire. In Oxford, for instance, UEone was given an 84 percent approval rating by local residents. Similarly, 75 percent of residents in Plymouth supported ‘EV Only’ charging bays, even though less than 1 percent actually drive an EV today. “And in Dundee, the UEone is popular with both EV drivers and the council because it solves the problem of charging in both affluent and poorer areas,” notes Calvey Taylor Haw, Chief Operating Officer at Urban Electric.

Driven by these positive statistics, Urban Electric is expecting a rapid growth curve in the coming years, which will be simultaneously complemented by the growing popularity of EVs in Europe. In the UK, the market share of plug-in EVs (PEVs) in the new car market hit 23 percent (as of October 2021), 17 percent of the share being accounted for by battery electric vehicles (BEVs). By 2023, BEVs are expected to achieve a 50 percent market share, and there could be 11 million EVs on UK roads by 2030. “To support this growth, we have already made our solution hardware-agnostic so that it can support every EV available in Europe,” says Taylor Haw.

Alongside this, Urban Electric is also working on making its solution even more scalable. The company is poised to be a key component of mobility as a service architecture. “It may be that a city has a particular interface for all mobility related requirements, whether that is to pay to park, charge an EV, or hail a cab. Since our infrastructure is built on open architecture, we can easily make those nuanced tweaks and be a part of their growth journey,” states Freeling Wilkinson. But Urban Electric is not only looking at business growth alone. To double down on the net-zero future, Urban Electric, in partnership with the World Land Trust, is committed to planting a tree for every EV charge point the company deploys. “A greener future is not just a business statement for us. It is the core of everything we do now and will continue to do,” concludes the Urban Electric team. 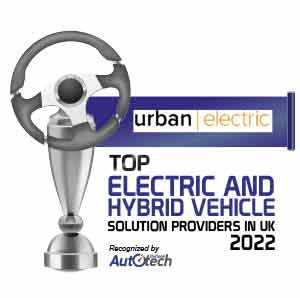 Description
Urban Electric is a British startup led by one of the most experienced teams in the industry, who previously launched the UK’s first electric car and first public charging network. 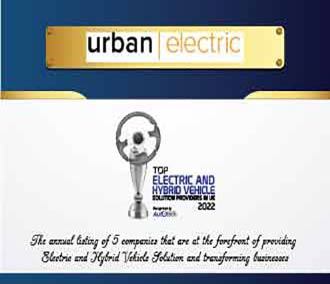 "The Urban Electric team spent four years and £5 million in research and development, to develop its unique solution the UEone retractable charger,which is going into commercial production for European markets in 2022"